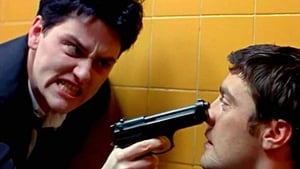 British Gangster film with a tongue-in-cheek approach to the genre, including a part played by ‘Mad’ Frankie Fraser. When Tone’s ex girlfriend resurfaces with a daughter he never knew he had, he moves from the world of blackmail, extortion and the occasional hit into the realm of nappies and lullabies. His pals, Speed and Bear, feel let down, but his employer Pops Den is furious and decides the best thing to do is wipe Tone out…but who will do it…and at what price?