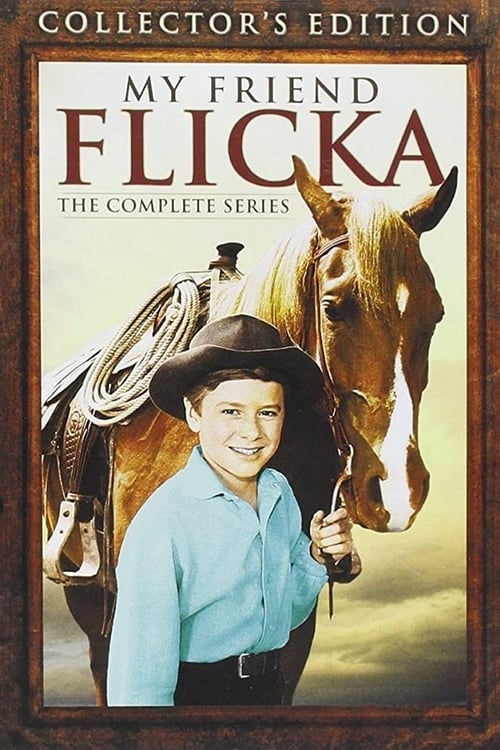 My Friend Flicka is a 39-episode western television series set at the fictitious Goose Bar Ranch in Wyoming at the turn of the 20th century. The program was filmed in color but initially aired in black and white on CBS at 7:30 p.m. Fridays from February 10, 1956, to February 1, 1957. It was a mid-season replacement for Gene Autry’s The Adventures of Champion. Both series, however failed in the ratings against ABC’s The Adventures of Rin Tin Tin.

After the initial Friday airing, viewers could still find the series on CBS Saturdays at 7 p.m. Eastern during March 1957, on Sundays at 6 p.m. from April to May 1957, and on Wednesdays at 7:30 p.m. from June to August 1957. NBC carried the program in color at 6:30 p.m. Sunday from September to December 1957 and at 7 p.m. Sunday from January to May 1958. In subsequent years, the series aired mostly on Saturday mornings on all networks. The Disney Channel ran it on Monday evenings in the mid-1980s. Over the years many viewers were unaware that the series produced episodes for only a single season.

My Friend Flicka starred native Canadian Johnny Washbrook as Ken McLaughlin, a boy devoted to his horse Flicka, Swedish for “little girl”, but actually an Arabian sorrel named Wahana. Gene Evans played the authoritarian father Rob McLaughlin, a former U.S. Army cavalry officer. Anita Louise was cast as the gentle-spirited mother, Nell. Frank Ferguson portrayed Gus Broeberg, the loyal ranch hand. Flicka is based on a novel by Mary O’Hara, written at the Remount Ranch, located between Laramie and Cheyenne, Wyoming. Some Internet sites say that the series is set in Montana, where some of the filming was done. The majority of the filming, however, was at Fox Movie Ranch. My Friend Flicka holds the distinction of having been the first television series filmed by 20th Century Fox. A 1943 film, My Friend Flicka, starred Roddy McDowall as Ken.