Is Jordan Peele’s “Nope” Available to Stream? When Will it Come to Peacock, Netflix?

Perhaps no filmmaker working today can blend horror, thought-provoking commentary, and a subtle slice of humor quite like Jordan Peele. On the heels of “Get Out” and “Us,” the legendary sketch comic turned horror auteur brings his latest thriller “Nope” to the big screen on Friday, July 22. In its Thursday night preview screenings, the film grossed a healthy $6.4 million dollars and is expected to bring in at least $50 million during its opening weekend.

As is often the case with Peele films, very little is known about the plot of “Nope” other than that it involves aliens, a brother and sister Hollywood horse-training team, a former child star turned carnival owner, and a bunch of people saying “nope.”

The cast is led by Oscar winner Daniel Kaluuya — the star of “Get Out” — and Keke Palmer as siblings OJ and Emerald Haywood and Steven Yeun as Ricky “Jupe” Park, the owner of Jupiter’s Claim carnival.

Watch the final trailer for “Nope”:

If that trailer gets you excited for the genre-bending brilliance that is a Jorde Peele flick then you might be asking yourself whether or not you can watch it this weekend from the comfort of your own couch on a streaming service.

Unfortunately — as you might have guessed — the answer is “Nope.” For the time being the film is only available in theaters, but that likely won’t be the case for long. Since the movie is a Universal picture, it will arrive on its corporate sibling streaming service Peacock in as little as 45 days following its theatrical release.

However, keep in mind that this possibility does not guarantee that Peele’s latest will arrive on Peacock in a month and a half. But, if “Nope” does come to streaming as early as possible, that would put it on the platform on Labor Day, Monday, Sept. 5, and depending on how it does in theaters, that would be a possibility, though I wouldn’t bet on it.

If we take a look at an apples-to-oranges Universal comparison, animated movie “The Bad Guys” debuted in theaters on April 22 and arrived on Peacock on July 1; 70 days later. If “Nope” follows that pattern, it will hit Peacock on Friday, Sept. 30 the unofficial kickoff of Spooky Season.

The kids’ cartoon was a surprise success for Universal, especially as concerns around the Omicron variant of COVID were keeping people at home much more than they are four months later. To date, “The Bad Guys” has brought in nearly $245.6 million dollars globally and hit streaming — not so coincidentally — on the same day that Universal’s next major animated release “Minions: The Rise of Gru” opened domestically; that film has already done $551.5 million globally and $276.5M domestically in less than one month in cinemas. 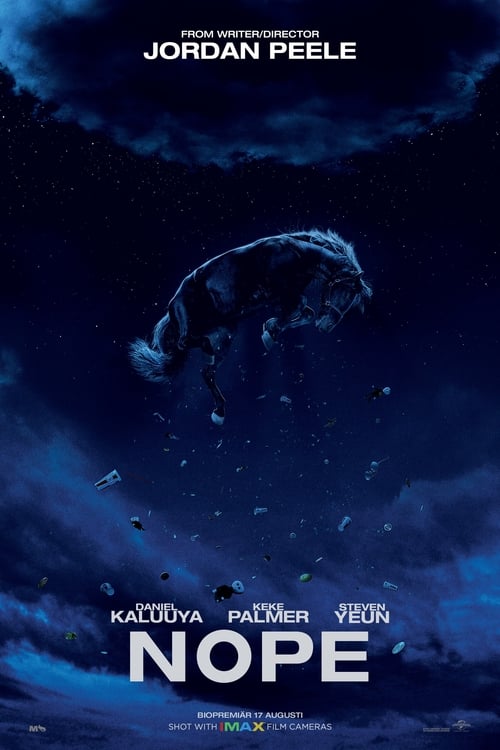 This thriller from director Jordan Peele follows a family of horse ranchers who provide animals for Hollywood productions.

When things start falling from the sky and people go missing, OJ (Daniel Kaluuya) and his sister Em (Keke Palmer) hatch a plan to film the terrifying phenomenon and strike it rich.

If Universal follows its 84-day release timetable from “Jurassic World Dominion,” “Nope” would appear on Peacock on October 14.

So, if “Nope” meets or even surpasses expectations at the box office, there is reason to think that Universal wouldn’t keep its theatrical window open a little longer than it needs to. Currently, Universal doesn’t have any films slated for an early September release, but does have Billy Eichner’s rom-com “Bros” coming out on Sept. 30 and “Halloween Ends” on Oct. 14. If “Nope” is continuing to make money as the calendar flips to fall, the studio could shingle releases by having the Peele flick come to Peacock just as its next horror film heads to theaters.

However, given what we know about how Universal has been windowing films, I would guess that “Nope” will be scaring the bejesus out of people on Peacock on at some point during the month of September, probably closer to the end of the month than Labor Day, but depending on the box office receipts, anything is on the table.

The movie will also eventually end up on Netflix, but as part of its 2021 deal for Universal's animated features, the world’s largest streamer doesn’t get the studio’s live-action slate until four years following films’ theatrical releases.

So, if you want to watch Palmer, Kaluuya, and Yeun battle some aliens (I think), you can either go to the theater now, check Peacock in roughly two months’ time, or wait until 2026 on Netflix.

Peacock is a subscription video streaming service from NBCUniversal that gives access to up to 70,000 hours of content including original shows, blockbuster movies, and classic television series. Peacock is home to “Yellowstone,” and “The Office,” as well as original hits like “Bel-Air.”